A Piece of CAKE Guide to Asheville Beer

Dubbed the “Napa Valley of Beer” by NPR and awarded Beer City USA three years in a row, Asheville is well-known for its numerous breweries—and it shouldn’t be surprising that Ashevillains are all about their beer.

But with so many options, how will you choose your next beer to drink? You could listen to beer geeks, follow the Travel Channel’s insider guide, or learn how a New Yorker spent 36 hours in Asheville. Or you could take a cue from one of the beer aficionados here at CAKE. 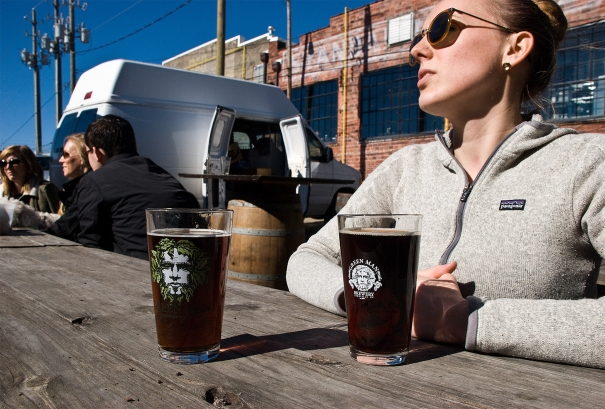 While none of us here at CAKE are true experts, we have strong opinions and aren’t afraid to passionately assert them. Here are our votes for best beers in town:

“The Triple IPA at Wicked Weed Brewing is probably my all-time favorite for the area. It used to be called Freak of Nature, but I think it’s called Menage-A-Freak now. They only brew it once a year. It’s 11% abv and is the hoppiest beer I’ve ever tasted, but Wicked Weed (being the geniuses that they are) manages to make it drinkable. It’s an intense beer, but it’s still enjoyable. Not for the hop-wary or faint of heart, though.

A few years ago, they also had a blended beer co-released with Foothills Brewing that was a 50/50 blend of their Freak Double IPA and Foothills Brewing Company’s Sexual Chocolate Russian Imperial Stout. Since that was a one-time thing, it can’t really be my choice, but I have dreams about the one growler I was able to get before they ran out.”

“I consider Pisgah Pale by Pisgah Brewing the perfect beer. It is completely drinkable and balanced. I’ll venture away from Pisgah Pale when I want a darker beer during the winter, and Highland Brewing has two excellent seasonals: Thunderstruck Porter and Devil’s Britches Red IPA.”

“Greenman ESB is my favorite because it’s dark, but not too dark or heavy. It has a slight coffee taste, and coffee is my other favorite drink. I also love the Greenman logo. Don’t know what that has to do with liking the beer, but I do.”

Katie refuses to choose just one

“Choosing my favorite Asheville beer is like choosing a favorite child; it’s just wrong! But there are a few I can never say no to: Greenman’s IPA for its citrusy aroma and drinkability; Pisgah Pale because its name is a fun alliteration and the ale is always consistent; and Highland’s seasonal Thunderstruck Porter because I love coffee (it’s made with Dynamite Roasting Company coffee) and it’s the perfect balance of robust and malty.”

Clark’s a fan of Coolcumber

“There’s nothing better on a warm summer day than Wicked Weed’s Coolcumber, which is only available during the summer season. The rest of the year, I prefer Wedge’s Golem, which is a strong, Belgian pale ale.”

“If Oskar Blues counts [editor’s note: it counts but just barely], then Mama’s Little Yella Pils. It’s a Czech Pilsner with a light body and clean, fresh flavors. I’m also a sucker for the references to the Rolling Stone’s Mama’s Little Helper, a song about the rise in popularity of Valium among housewives in the 60s. It’s 5.30% ABV, must be consumed in 19.2-ounce “stovepipe” can for best results, and it’s a tranquilizer to be sure.”

Dark, bold flavors are a must for Jason Shope

“My favorite beer is the Ninja Porter by Asheville Brewing Company. It’s a dark beer with a nice flavor, and it has a great chocolate and coffee aftertaste. Most places around Asheville carry this beer, but it is usually poured from a can into a glass and takes on the slightly metallic taste of the can.”

“I’m definitely not a beer connoisseur, so I’m not sure I can wax poetic about why I like it—I just do! Taking a sip of a pint that’s super hoppy is sure to prompt my ‘baby eats first lemon’ face, but I’ve yet to meet a local ale or stout I don’t enjoy. If forced to narrow it down, I’d have to say my local go-to is Highland Brewing Company‘s Gaelic Ale because it’s readily available and consistently tasty.”

“I got hooked on French Broad Brewery’s Gateway Kolsch at the Universal Joint, a neighborhood favorite and a short walk in our neighborhood in West Asheville. It’s easy to find most anywhere in town.”

“I’m a huge fan of Greenman’s IPA, partially due to its clean, balanced hoppiness but also for sentimental reasons. When we first moved to Asheville in 2006, there was no “South Slope”; Greenman was pretty much the only brewery on the south side, and it was tiny and nearly always empty—so you were always guaranteed a spot at the bar. It was there that I had my first true IPA, and it was love at first taste. For me, it’s been all about the hops ever since, so I also love Wicked Weed’s Freak of Nature Double IPA, French Broad’s IPA and Rye Hopper, and The Wedge’s IPA (probably in that order).”

You’re sure to find Shawn at the Wedge

“I’m going to have to pick two beers from Wedge Brewing because I’m there so often. First is their Iron Rail IPA. I love the hoppy freshness and sharing a pitcher of this beer with a group of friends (or strangers!). My second is their Community Porter. This beer is only available in the cool, winter months, and it’s rich, malty taste makes it the perfect beer to drink when huddled around the heater.”

“Gluten Freak at Wicked Weed is my personal favorite, as it tastes just like their hoppy Freak of Nature, with the gluten removed. Lucky me! My husband also won’t stop talking about Wicked Weed’s special French 75, a quirky gin-influenced brew, that may have been a passing special edition. He hopes they’ll have it again someday. Lastly, Wedge Brewing’s Golem is a wonderful trippel and favorite of local chefs, who report it creates inexplicably giddy and happy feelings in anyone who drinks it.”

With such a wide variety of beer styles and breweries in Asheville, you’re sure to find your next favorite beer. If you want a more exhaustive guide on breweries and events, be sure to check out these guides and tours:

If you want to try to taste as many beer styles as possible, Asheville has a wide variety of events and festivals. Don’t forget to buy your tickets early because these festivals sell out fast:

What’s your favorite Asheville brew? Let us know in the comments below!

No replies to “A Piece of CAKE Guide to Asheville Beer”